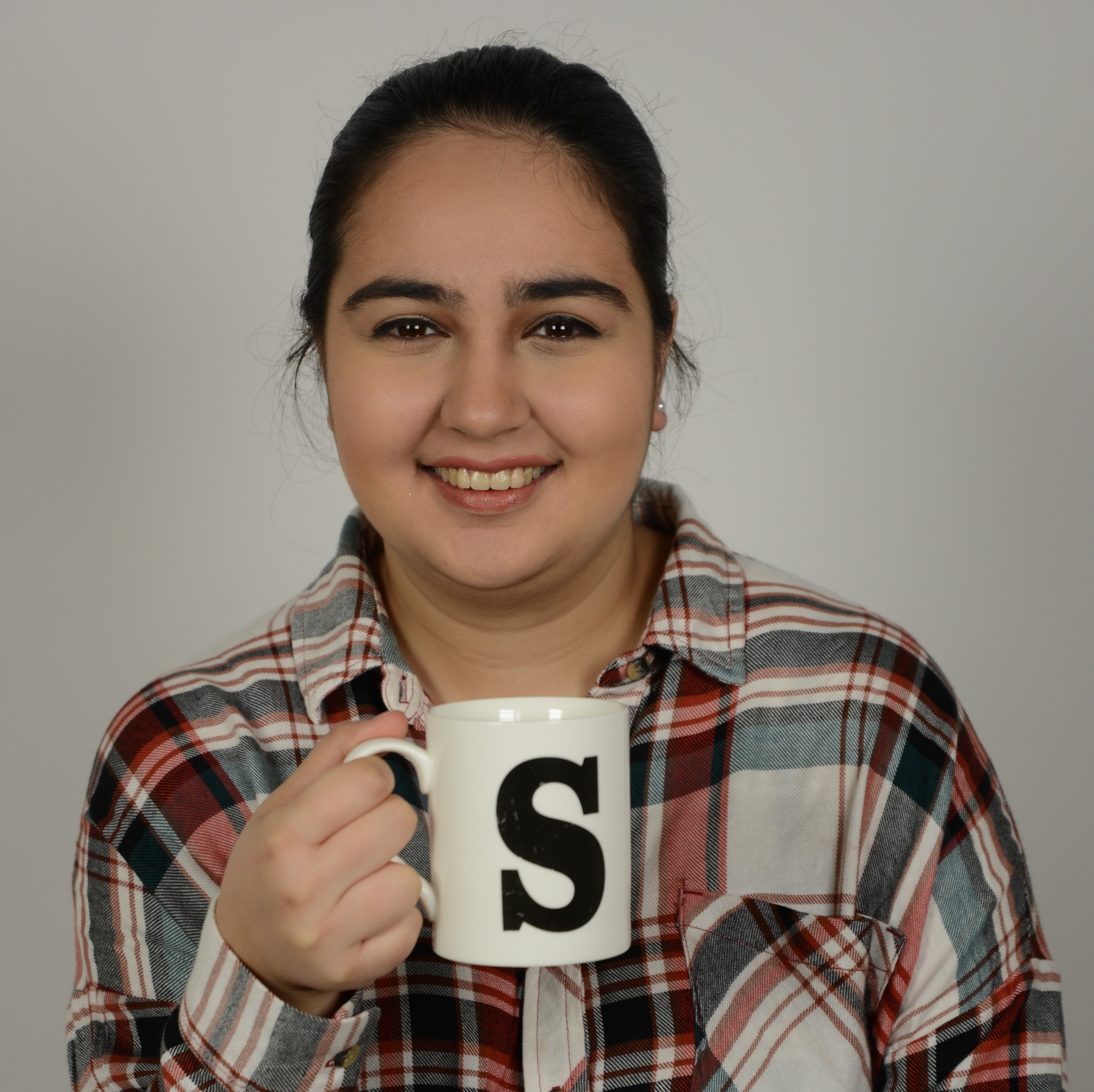 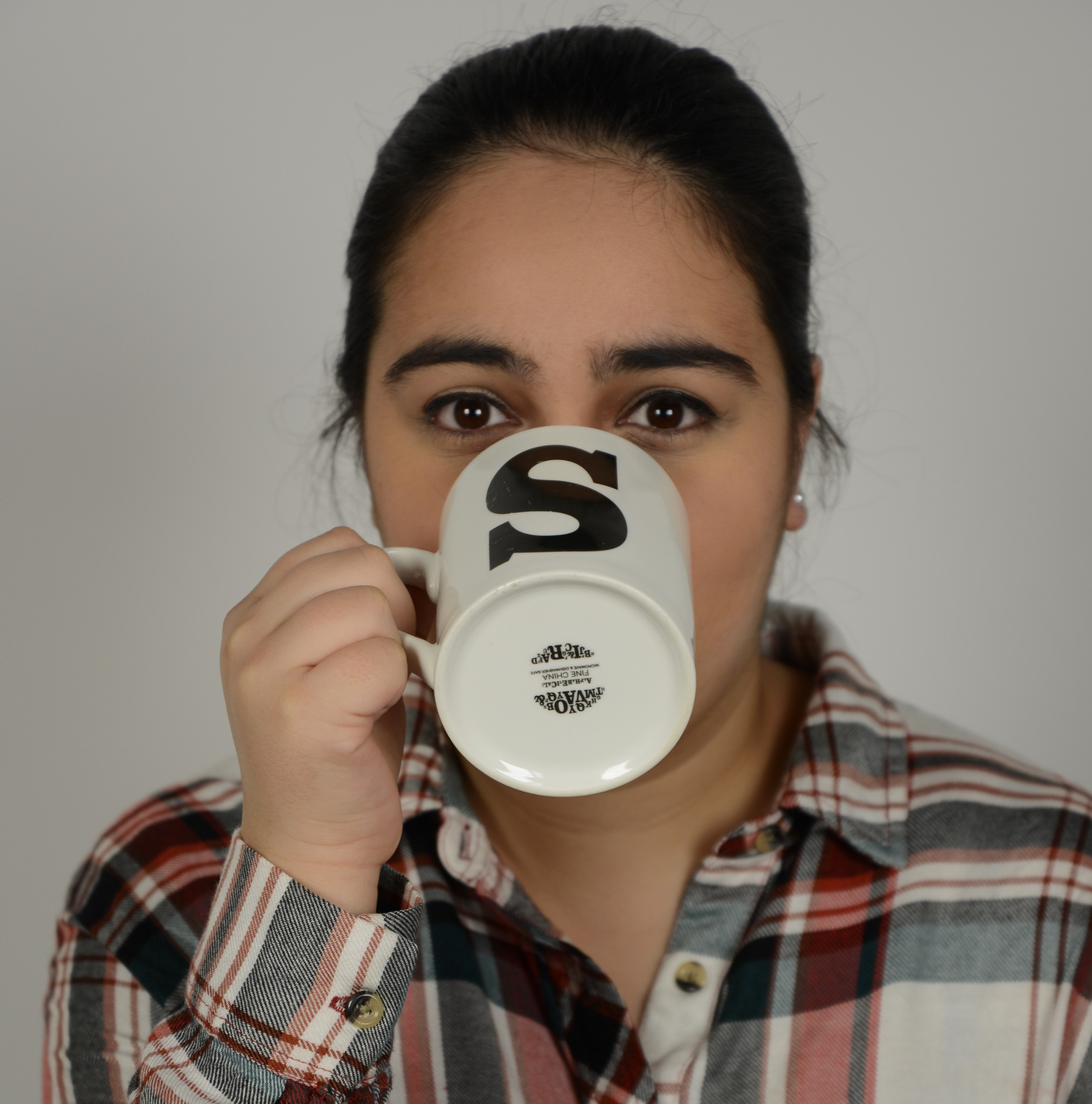 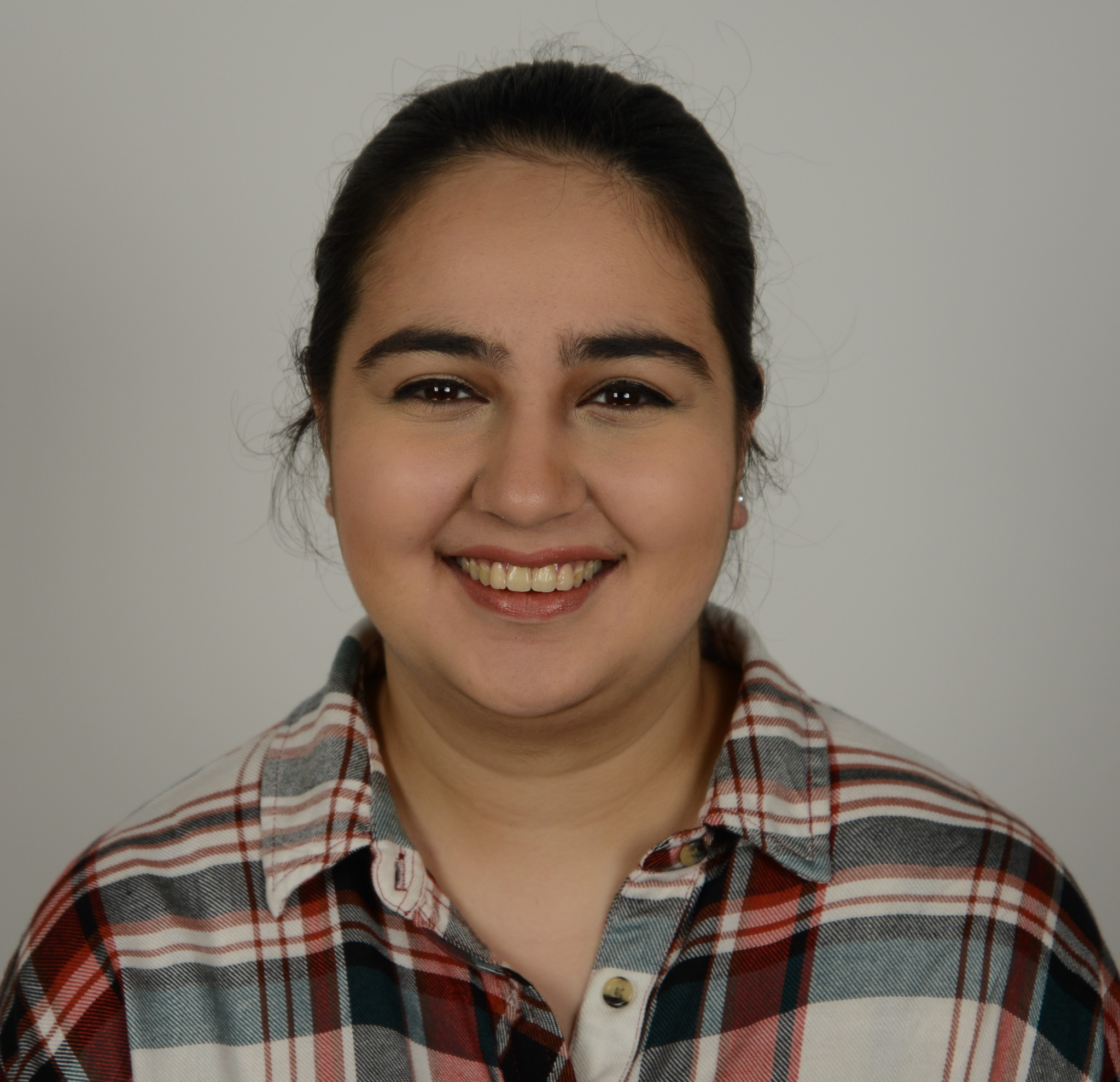 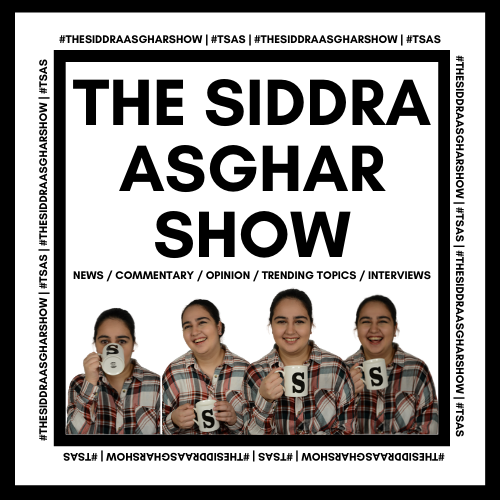 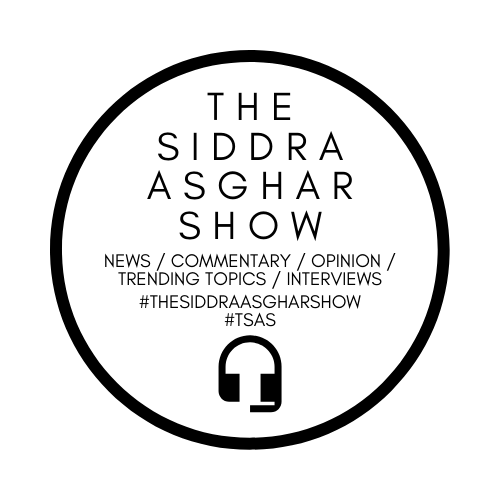 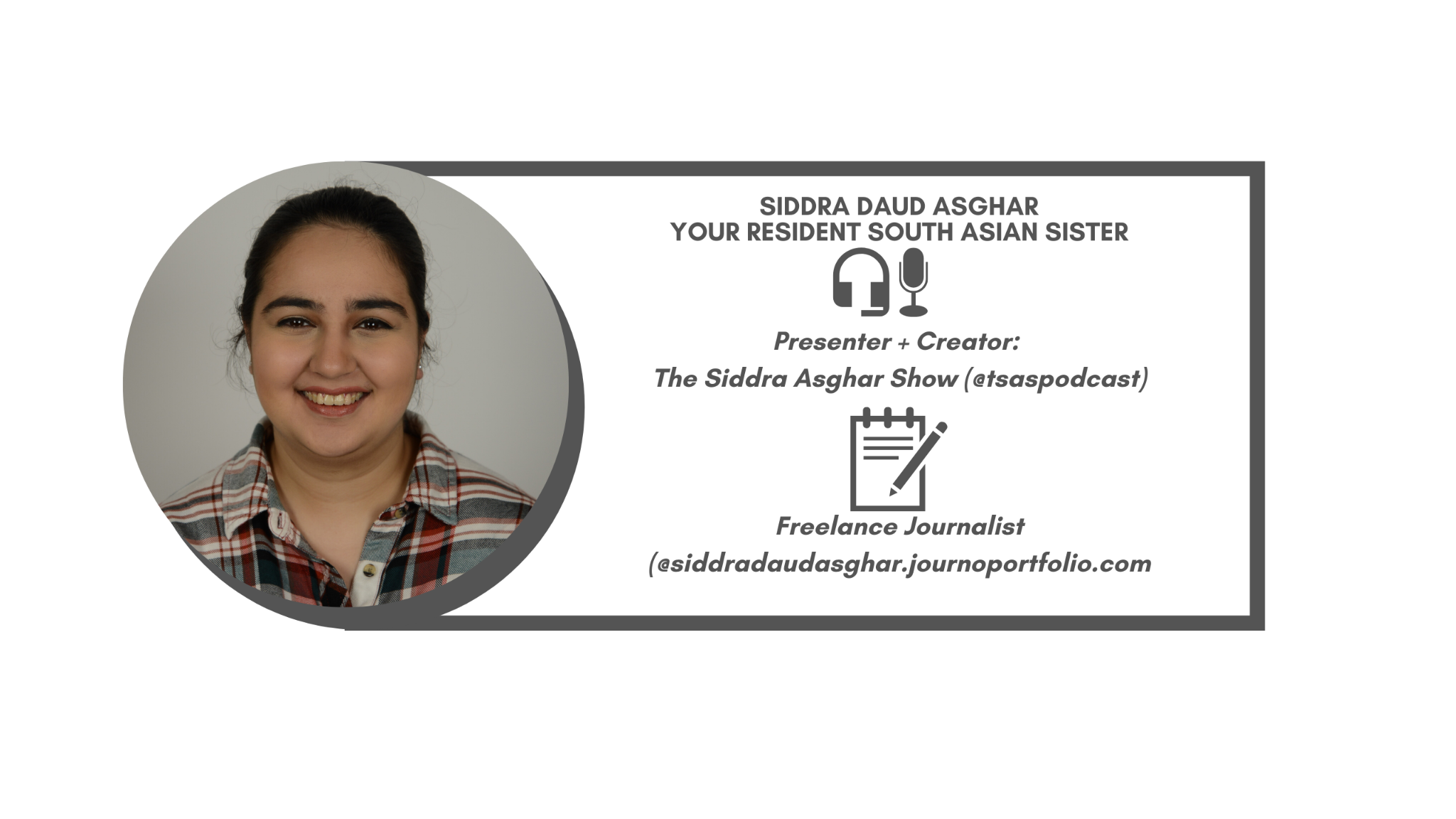 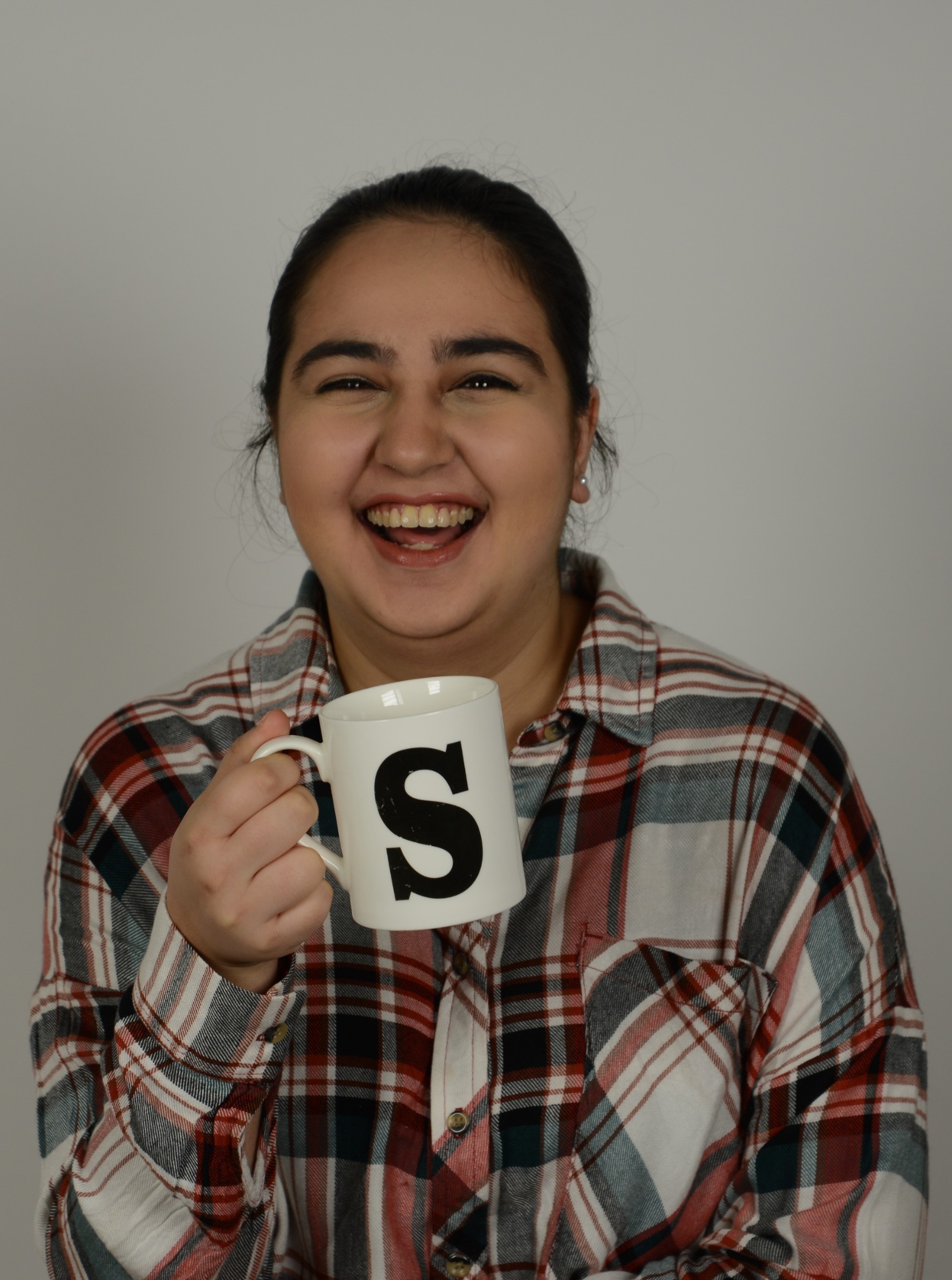 The Resident South Asian Sister Speaks On Her Story

"The Siddra Asghar Show is the platform I wish I had seen growing up as a second generation South Asian girl in a small town in the North West of England. Somebody who looked like me, telling stories similar to mine, interviewing like-minded individuals who could also share their stories. But why wait? Why wait for someone else to tell my story? Nobody can tell your story like you can, trust and believe. That is one of the core values that drives me to produce this podcast. "

It all started when a brown girl from Bury had a dream...no, really, you read that right. Raised in a traditional British Pakistani household with her parents and four siblings, Siddra dreamed of doing big things. She wanted to be have her own talk show, write a best-selling book, attend awards ceremonies around the world, snatch trophies and even once claimed she wanted to be the Pakistani version of Oprah Winfrey!

Her dreams were first formed in the corridors of The Derby High School. Inspire, a multimedia hub for the students, was opened during her time there and saw her collaborate in an e-journalism group named after the building with her creative mentor Lynn Provoost, attend work experience opportunities with advertising agencies BJL + McCann and being one of two students chosen to visit 11 Downing Street to meet former Chancellor of the Exchequer George Osborne as part of a collaboration with the Ideas Foundation.

With that tenacity and ambition, she took the risk that would make most South Asian parents seethe - she changed her career ambitions from becoming a lawyer to becoming a journalist. *insert gasps from Desi aunties and uncles everywhere*

However, her parents, after much deliberation - both having sacrificed so much to come to this country and work hard at giving their dependants a better life - supported her decision. She remembers her father giving her the following advice:

"Be the best. No matter what you do, work hard and be the best in your line of work."

With their blessing now behind her, her time at Holy Cross College included a column in the college blog #SiddraSays, an appearance on ITN/ITV News at Six as part of a 2017 General Election young voter segment and achieving an English prize for her contributions to raising the profile of the college magazine as a key culture and entertainment columnist, awarded to her by her Media Studies and English teachers Mr Bland and Mr Weatherall respectively.

She has gone on to study a joint honours degree in English & Multimedia Journalism at Manchester Metropolitan University. She attended a Podcast Production Bootcamp in her second year at Reform Radio as part of an Enhanced Third Term partnership funded by the university. This became what would be the first steps on her podcasting journey. Months later, having attended various industry events at MediaCityUK, watching countless YouTube videos and enduring long nights full of work and without sleep, March 2o2o became the month her podcast was released to the world. Other highlights from her time at MMU include featuring on an episode of Bang to Rights, a podcast by the journalism department dedicated to media law, working as an Editorial Assistant and Opinion Editor for the student arts and culture magazine aAh! and being nominated for the Outstanding Contribution to Equality, Diversity and Inclusivity Award as part of the 2o19 Faculty of Arts and Humanities Student Awards. She hopes to continue her education there in September 2020 by undertaking a Masters in English Studies.

Siddra is not only dedicated to telling her story, but also paying respect to those who paved the way for her to be able to do what she is doing, something she feels up-and-coming media personalities do not do enough of once they are established:

"Paying tribute to those who come before you is something that rarely happens in the creative industries. People are treated as disposable, and that's unfair. People can put you on and receive no thanks in return, and that's not right. Once people get to a certain level, they claim themselves as being above giving credit. It just makes me want to scream at them:"remember your roots!" Remember that nobody owes you anything and you are nobody without your integrity, humility and decorum.

That is why I dedicate my social media hashtags #SiddraShoutsOut and #TSASShoutsOut to shining a light on those who made this dream of mine come true in some way, shape or form - both behind-the-scenes and at the forefront. The day I stop doing that is the day I throw my moral compass out the window. Spoiler alert: such a day is never going to come."

For journalism enquiries, please email siddradaudasghar@gmail.com or get in touch @siddradasghar

For podcast enquiries, please email thesiddraasgharshow@gmail.com or get in touch @tsaspodcast